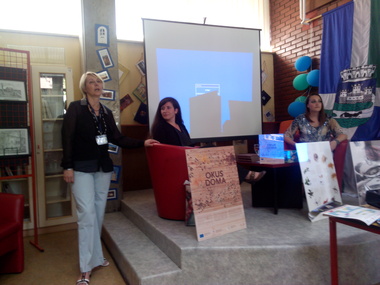 The second day of Refugee week started on Tuesday at 10h in front of the reception centre for foreigners Ježevo where the  Jesuit Refugee Service organised a table tennis tournament.

A thematic session of the Committee for National Minorities of the city Zagreb and the Coordination for Human Rights of the City of Zagreb was held in City Hall from 10h – 13h. It tackled the topic of integration problems of refugees in Zagreb, especially regarding finding apartments, difficult access to education and language study, one of the key elements of integration into society, and problems regarding employment.

Later in the afternoon, from 18h in the city library Caprag in Sisak the recipe and refugees’ stories book and campaign “Taste of Home” was presented. The professor of Sisak's gymnasium Marina Kasa presented her experience in working with asylum seekers and refugees that visit Sisak often and participate in creative workshops and football tournaments. She stressed that the value of such visits is in informing young people about such topics and in working on the acceptance of different people through direct contact.

A member of Taste of Home collective David Ajobi pointed out that this collective is a great way of refugees getting to know Croatian society and an opportunity for them to contribute and become happier members of the society.

Emina Bužinkić then described how the idea for the cookbook was created. While volunteering in the asylum reception centres in Šašna Greda and Kutina, she realised that the language that was the easiest to make contact with people there was the language of drinking coffee and cooking, which became the foundation for deeper relationships. Refugees, besides their recipes, shared the stories of leaving their countries for the cookbook.  Work with the collective is a space of dialogue and remembrance of home, but also an opportunity for refugees to introduce their own cultures and dishes. At the end of the evening, Emina announced plans for opening a catering service that would create job opportunities for refugees via a social cooperative, and in a year or two the big dream is opening a restaurant, that already has a visual identity and a blueprint.

„I am very pleased Emina introduced this project in her home town, a town that is in dire need of such content, even though it is multicultural, as people of different religions and nationalities are peacefully living in it. Stories like this should be close to the citizens of Sisak precisely because of that, and this project can be an inspiration to join in and learn something, or to create something completely new“, Svetlana Novaković stated.

„We all realise that a for the realisation of his or her life, a person does not need only food for the belly, but also a different kind of food, often more precious. In today's promotion with an original closeness the two needs, aspects of human life were put together – we saw the fragrances of tempting dishes that are reaching us through some other worlds and times, and we also clearly felt the warmth of a human heart seeking help, and another that responds, shows empathy and reacts. That's how it was clearly illustrated what are our possibilities in acting for the acceptance of refugees, people in search of safety and happiness“, Zrinka Hafizović, another visitor, concluded.

The Taste of Home collective goes to Rijeka on Wednesday, 17.6., where with the help of organisation Drugo more it will have a culinary exchange with the collective Food not Bombs. From 20.30 they will open an exhibition Taste of Home and tasting of dishes prepared earlier, with the sounds of Gypsy Groove playing in the background. In Zagreb Jesuite Refugee Service is organising a discussion „This is just the beginning of a new life“ in the library Bogdan Ogrizović from 13h, and the Society for psychological help is organising a discussion for students „Psychological support for refugees“ at the Faculty of Humanities and Social Sciences.