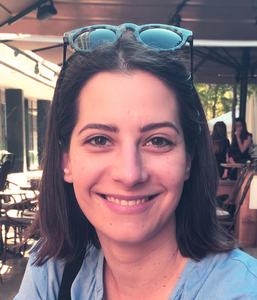 I was born and raised in Zagreb where I graduated Political Science. After attending the Peace Studies and studying in France for a year, I began to volunteer at the Centre for Peace Studies and provide psychosocial support to refugees located in Porin.

The topic of refugees and forced migration has been of interest to me for years, and through the volunteering experience, I have realized that I want to focus more on this field in my life. During the humanitarian crisis, I was one of the coordinators of the Welcome initiative and I provided support to refugees in the camp in Slavonski Brod and at the reception centers for seekers of international protection. At the moment I work at the Centre for Peace Studies where I coordinate the Asylum, Integration and Human Security program and am actively involved in the socio-economic integration of refugees and other migrants in Croatia.

My love for the Taste of Home has evolved over the course of the project before the catering has been established, and most of all through personal acquaintances with the members and today's employees of the Taste of Home cooperative. Sadou, today the main chef of the Taste of Home, was the first person I met in Porin, and besides being a close friend, he became my favourite chef, whose culinary specialties I recommend to everyone. I've been following the development and the various phases of the Taste of Home for a long time and I consider it a wonderful project that transformed into an example of good practice of refugees’ and migrants’ integration in Croatia. Apart from the economic emancipation of newcomers, provided by the catering cooperative, I think that the Taste of Home tells a wonderful story of friendship, intercultural dialogue, elimination of prejudice, sharing of differences and similarities through food, and, as such, enhances and opens the society in which we live.

In the cooperative, I am a representative of the Centre for Peace Studies, one of the cofounders of the Taste of Home. As I work on socio-economic integration and the promotion of migrant (social) entrepreneurship in Croatia through my everyday work, joining the work of the cooperative seemed logical to me.

The Centre for Peace Studies (CPS) grew out of various forms of direct peace building in Western Slavonia, where in 1996 it was the first time that the establishment of the organization was discussed. The CPS was formally established a year later with the aim of promoting the values of nonviolence, social justice, respect for human rights, tolerance and acceptance of diversity through participatory methods of peace education, research and public advocacy. The CPS acts as a non-governmental, non-profit organization promoting non-violence, human rights and social change by linking education, research and activism, while asylum and integration have been its focus for many years, during which it has "given birth" to the Taste of Home and the Welcome Initiative, as well as co-founded the first refugee-migrant organization in Croatia, Association of Africans in Croatia, the Football Club Zagreb 041, and the Cooperative for Ethical Financing. Through its work, the CPS wants to increase the openness of the society to diversity, raise its capacity for nonviolence and non-violent transformation of social conflicts, and promote and strengthen the principle of social solidarity and cooperation.