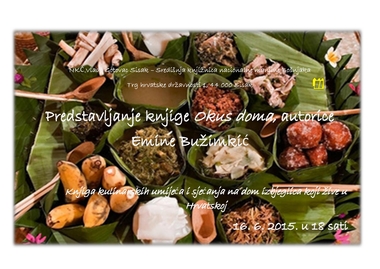 With the marking of Refugee Day on June 20th, today's press conference of the Coordination of civil society organisations for the integration of refugees into Croatian society announced Refugee Week, held from Monday, June 15th, to Sunday, June 21th. Tea Vidović from CMS stated that this week is an opportunity to get to know Croatia's refugees better and an opportunity to get rid of fear and prejudices, Tvrtko Barun from JRS stressed that this week's message is to encourage the changing of the system from below, and Kristina Perišić from DPP  pointed out some of the most pressing problems of integration faced by asylum seekers and persons under international protection.

Croatian Red Cross held a promotion of the book manual Protection of refugees and vulnerable groups of migrants at Kino Europa at 14h, and after that the art exhibition of refugee Anna Artyushenko was opened, in the organisation of Red Cross and UNHCR. The exhibition was opened by Gordana Valenta from the Ministry of Interior stating that refugees enrich Croatia's society and that Croatia is gaining a lot from them, Terence Pike from UNHCR, who reminded us of the resilience and straight of people forced to flee from their homes, and Robert Markt from Red Cross, who concluded by stating they are all proud to be able to make refugees' lives in Croatia a little bit easier.

At 19h Velvet Cafe held the literary night „Not Belonging“ with guests Bekim Sejranović, Ivana Simić Bodrožić, Natalija Miletić, Inayatullah Jiskani, Rabah Baskhim i Sandra Wahech, organised by CMS and UNHCR. All authors read poetry or prose connected to war or refugee experience: Ivana read four poems, Natalia a longer fragment of a story about identity, belonging, hatred, Bekim shared a fragment about seeking asylum in Norway and the following cultural differences. Inayatullah described his last days in Pakistan and his thoughts about the uncertain road ahead with a vague future that follows, and Rabah read two poems in Arabic.

On Tuesday, 16.6., we have a thematic session in City Hall of  the Committee for National Minorities of the city Zagreb and the Coordination for Human Rights of the City of Zagreb from 10h – 13h, that will present the topic of integration problems of refugees in Zagreb, especially regarding employment and work possibilities. At 10h the Jesuit Refugee Service is organising a table tennis tournament in the reception centre for foreigners Ježevo. At the end of the evening we are moving to Sisak, where refugees and activists will present the recipe and refugees’ stories book “Taste of Home” in the city library Caprag (Trg hrvatske državnosti 1), starting from 18h.

Taste of Home is an investigative-gastronomical-cultural project that is introducing us to the cultures, traditions and societies of origin of refugees in Croatia, by recording their memories of home, the fragrances and tastes of their kitchens. This experiment is an exchange of life stories and culinary crafts of refugees and people from Croatia.