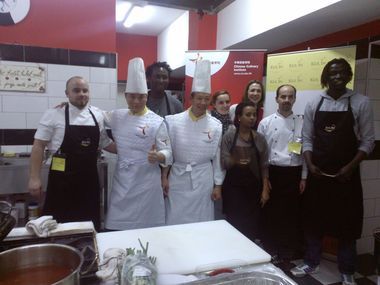 The guest chefs Chan Chun Hung and Leung Kin Sum from the Chinese Culinary Institute (CCI)- Hong Kong, have shared their master skills of preparing traditional Cantonese food with the participants of 3days workshops in Culinary Institute in Sisak. Since in Taste of Home we treasure this kind of culinary-cultural exchanges we have gladly applied to the worshops and have had a go at making the world famous spring rolls, dumplings and woks and have truly enjoyed the magic of East. We have had an insight into some secrets of the food preparation which lasts considerably longer than its thermal processing in order to achieve the perfect balanse of the ingredients. With their amazing skills, dedication and detailed approach to ingredients these chefs have shown us actually how much they respect the food. For us this encounter with the chinese kitchen has been an encounter with science and art, and we've been thrilled to have this opportunity in taking over a small part of knowledge these amazing chefs decided to share.

Chefs Chan Chun Hung and Leung Kin Sum are the representatives of the world famous Chinese Culinary Institute (CCI) from Hong Kong, which became a new partner of the Culinary Institute in Sisak. The workshops held there from January 27-29th 2016 were organised through fazes, from amateur up to professional level. So, there was something for high-school students as well as for employed professional chefs. Our Taste of Home team perfectly fit in somewhere in the middle.