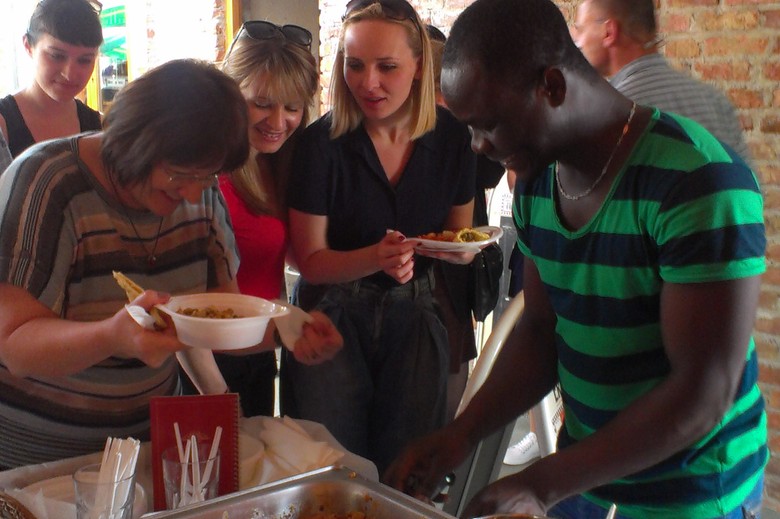 A Nigerian specialty made from meat, melon seeds, bitter leaf and dried fish.

Prince W. Soniyiki is 28 years old and he arrived in Croatia on Christmas Day 2011. His asylum request was granted and he currently lives in Biograd na Moru. His home was the city of Jos in Nigeria where, as his name reveals, he was a prince. His country, the most populous state in the Black Continent, is home to more than 155 million people. It spreads over 923 thousand square kilometres of the western part of Africa, and was named after the river Niger, which flows through its territory and around which most of the population is concentrated. North and south of the country are covered with plains and hilly regions, while the estern and central part are areas of high plateaus.

Nigeria is a place where various ethnic groups, religions and cultures mix, with more than 500 languages, of which the official ones are Edo, Hausa, Igbo and English. Ethnic and religious diversity was often a matter for manipulation, as shown through the history of the country over the last couple of centuries. In the territory of Nigeria there used to be multiple city-states, fortifications of different peoples from which Europeans and Americans took the slaves without conquering the territory. In the 19th century, muslim Fulani started a holy war and conquered a large swath of the territory while implementing different policies for Muslim and non-Muslim population. During the same century, Britain started to take control over the country, and in 1914 Nigeria officially became a British colony. Since 1960, when Nigeria achieved independence, the situation in the country was extremely complex. Succession of military coups by members of different ethnic groups left heavy consequences for the population. In 1967, under the leadership of colonel Ojukwu, eastern part of Nigeria populated mainly by Igbo people separated and took the name Biafra. Bloody war that ensued resulted in thousands of Igbo people killed, and in the end with the failure of this state project. Economic isolation of Biafra resulted in social catastrophe and the world was shocked by the photos of the starving population. The first multiparty elections in Nigeria were held in 1992, but had not bring the country peace. Stability is greatly threatened by widespread adoption of sharia law, that emphasises the ethnic and religious divide between Muslim and Christian population.

Prince emphasises that the process of democratisation in Nigeria is very difficult due to inter-ethnic and inter-religious tensions. Daily life is hard and dangerous. There’s no respect for human rights. The government is corrupt, and it’s especially problematic that the police is corrupt and behaves violently towards citizens. Such political situation forced Prince to leave his country. When his life was in danger, he had to flee. He wanted to reach Italy, but by chance ended up in Croatia. His mother and sister are in Egypt. Prince is happy in Croatia, he feels safe and enjoys each day. “When I see that more and more Nigerians are leaving the country in search of a better life, I understand them very well” he told us.
While he was in his country, Prince lived in a palace with 8 members of his family and 120 household staff. His family was influential and often participated in mediation in decisions about the tribe in which his mother was a princess. Although he himself never cooked, he would spend a lot of time in the kitchen, trying out the dishes and observing the cooks and so he learned about cooking. They would eat all together at the table and there was no talking over the meal, unless he started the conversation. The meals were served three times a day, at 8 a.m., 2 p.m. and 8 p.m. They were using crockery and cutlery, but it was customary to eat with hands because it’s considered that the dishes are tastier that way and they always had finger bowls by their side. “A lot of people were passing through my house, and for sure our house had the best food in that part of the country”, says Prince. The most festive dishes were prepared for the period of Egungun carnival. The carnival was held once a year and on this occasion his mother would prepare traditional dish called Iyan, which is also Prince’s favourite dish. It is made from dried and hand-shredded yam flour. This dish is usually served with egusi soup, a Nigerian speciality made with meat, melon seeds, bitter leaf, dried fish and many other ingredients.

Variety of ethnic groups and cultures reflects in the Nigerian cuisine, famous for its varied spicy food made with palm and peanut oil. Arabic, European and Asian influences are also discernible. Cocoa and peanuts, plants originating from the South American continent are the most important agricultural crops. The foundations of the cuisine are miscellaneous root vegetables such as cassava and yam, as well as beans. Very popular dishes are meat and vegetable soups, hot sauces and a wide range of meat platters. The food is usually served with beer and palm wine. Prince has revealed that the food has a very important role in a marriage, to the extent that bad cooking can cost a woman a marriage.

Federal Republic of Nigeria was a British colony until 1st October 1960, when it achieved independence. In 1963 it became a republic. Civil war, the so-called Biafra war, lasted between 1967 and 1970, where the southern part wanted secession and independence from the rest of the country. After that there were no conflicts of such magnitude even though the constant military coups prevented the stabilisation of the situation in the country. In recent years, violence is on the rise due to the increased activity of the Islamist group Boko Haram. From 2009, they were conducting military operations with the aim of establishing an Islamic state, while in August 2014, after continuous bomb attacks in major Nigerian cities earlier that year, they declared the caliphate in the northeastern territory under their control.

Schools are often targets of Boko Haram attacks, they are accused of numerous kidnappings, while declaring a war on both the Nigerian government and non-Muslims.

Annual migration is 0.2 per thousand inhabitants, however, the mortality rates are still extremely worrying.