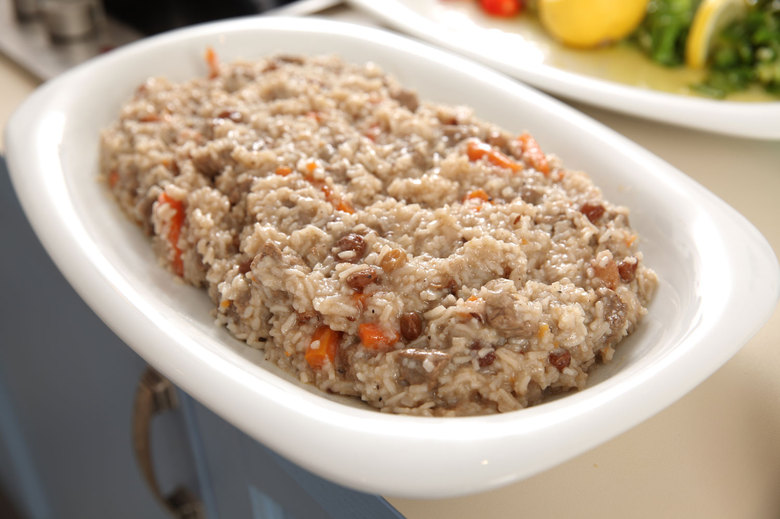 Pulao is a traditional dish often prepared in Afghanistan, Pakistan and other surrounding countries. It is prepared almost daily for family lunches. 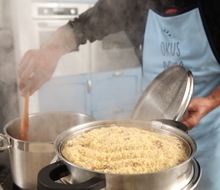 Najib is from Afghanistan, from the city of Mazar-e Sharif, which is the third largest in the country. Afghanistan is a mountainous country divided into two parts by the magnificent Hindu Kush mountain range. Kabul is the capital and the largest city, with other major cities like Kandahar, Herat and Mazar-e Sharif, Kunduz and Jalalabad. With an area of 647,500 km2 and a population of 29 million, it is on the 41st place in the world by size and the 42nd by population. In addition to the division to provinces, it is divided to south, west, east and north parts. Each of these parts has its own specialties: east is known for kaymak, which is very similar to the Bosnian one, and quroot, dumplings made from goat cheese, north is famous for cherries, sour cherries, musk melons and watermelons, and west and south by the production of dried fruits, rose oil and rose water and for juicy pomegranates. Afghan cuisine is not hot, but it uses plenty of spices such as anise, cumin, cloves, pepper, cinnamon, poppy seeds, dill and saffron.

Najib’s favorite childhood food, which he still really loves, is pulao. This is a very common dish on the Afghani table. Wealthier people eat it with kebab and a soup, while who are not wealthy just eat pulao, after which they drink green tea. In some parts of Afghanistan the custom is to drink black tea, but whole Mazar-e Sharif and its surroundings are famous for the green tea. In Afghanistan whole family eats together. Najib comes from a large family in which they kept to this custom.

-Dinner is abundant and shared by whole family. Everyone is sitting on colorful cushions on the floor and waiting for the women to finish cooking. While women cook, children dance to the music from old radios powered by batteries and grown-ups clap their hands. Over dinner people share stories of the events from 100, 200 years ago, historical stories, etc. There is no truth in it, they are more like invented stories and myths. There was always a big plate of food on the table and one would eat using their hands, and even now I love to eat in that way. I shared a plate with my sister or three of us would eat together. Father was eating together with our mother or grandmother, and since our family was big, two or three kids would eat from one plate. In Afghanistan, those who have small families make one big plate and eat all together. Our family had 15 members and we would share a plate between two or three people. And we always ate with our hands, even now at home I still eat with my hands.

Afghanistan is known as the site of many political conflicts and economic decline. Although it was exposed to wars many times, it was never completely defeated. Russian generals were warning young soldiers in the campaign against Afghanistan with this ominous words: "Afghanistan was not conquered by Genghis Khan's hordes nor by Alexander the Great. It was not conquered by the Britain, Pakistan, Iran or India. You are going to the land that no one ever subdued! ''
- You know what? I’m 36 years old and I had a very hard life, all the time I just smelled war, smoke and bombs ... The Russians came, the Americans, the Taliban, Al-Qaeda ...

In 1978, military coup occurred and the communists came to power. The following year the conflict between mujahideen and the Russians begun and the country was liberated in 1989. Shortly after, internal conflicts between Afghan tribes started: the mujahideen led by Massoud conquered Kabul and begun a new era. Taliban rule marked modern Afghanistan and left lasting consequences. Today, Islamic Republic of Afghanistan is burdened by the destruction and conflict, with major problems coming from corruption, crime and drug trafficking.

Najib lives in Croatia with his common-law wife and four children for seven years. He came to Croatia first, after a political persecution, and after he was granted asylum his family joined him on the basis of the right to family reunification. Due to the fact that he was one of the first persons to get protection, Najib and his family have experienced many difficulties in the integration in the Croatian society, including the impossibility of legal marriage. All their children are now attending school, and the younger son is achieving excellent results in judo.

Najib’s wife is a Russian from Uzbekistan. - When I cook, I cook afghan dishes and prepare pulao with rice that my mother sends from America. You can’t find such rice here. With my wife I prepare manti, as well as some other Uzbek dishes. When we don’t have much time, we cook Croatian dishes. In Croatia we eat potato often: potato puree and chicken fried with eggs and flour. I love fried food. We make ćevapi, also with potatoes. We don’t have that in Afghanistan. When I was in Dalmatia, in Split, I ate meat with potatoes and carrots: they put it in the oven and bake - we have a similar dish. We also ate lamb. I love all the dishes in Croatia, there’s a lot of meat here, people eat a lot of meat, which is not the case where I come from. In Croatia, when I visit friends, they eat meat every day, for breakfast, lunch and dinner. In Afghanistan we eat a lot of spicy food, my wife loves it too, but I shouldn't eat it because of my health. I eat salad with a bit of oil and lemon. From Afghanistan, I miss rice so much, you can’t find such rice here. And the tea...

Najib’s favourite dish in Croatia is fried veal steak with potato puree. The steaks should be pounded lightly with a meat tenderizer mallet and seasoned (with salt, pepper or other spices). First coat them with flour, then soak in whisked egg and in the end in breadcrumbs. Put them in heated oil and fry on medium flame until they become golden-brown. For potato puree, peel the potatoes and cut them in cubes, then boil for 20 minutes in salted water. Test if they can be easily split with a fork, to know when it’s ready. Drain it, then squash with potato masher and add milk and/or cream (which can be hot, lukewarm or cold, depending on taste), softened butter and chives or some other herbs (to your taste).

According to some research, the area of present-day Afghanistan had a developed civilisation even in the prehistoric times, and over the last millennium it was a meeting place of four cultural and ecological areas: the Middle East, Central Asia, South Asia and East Asia, a place of multiculturalism and multi-ethnicity, but also a meting stage for the forces of major powers and regional rivalries. After the Soviet occupation and the short reign of Mujahedin groups, in the mid-90s of the 20th century the Taliban came to power. It brought some stability after decades of conflict. However, they imposed a strict and conservative form of Islam with religious police patrols that were enforcing moral rules according to which the women were banned from education and employment, and were forced to completely hide their face and body with burkas (''burqa''). The music was banned as decadent, and television was outlawed. Respect for human rights was, and still is today, at the lowest levels.

The Taliban were deposed by the US in 2001 after refusing to hand over al-Qaeda leader Osama bin Laden for the attacks on the United States on September 11, 2001, which marked the beginning of the war. Meanwhile, the Afghan government under the patronage of the United States was established, but the Taliban were joined by thousands of militants, mainly from Pakistan, and the conflict persists till today. Withdrawal of the majority of the US forces from Afghanistan was announced for December 2014, but there still remains a large number of civilian casualties, according to the estimates between 18,000 and 20,000 and more than 2.2 million refugees and 650,000 internally displaced persons.